I will  give some links to these resources. On this front page and in the comments section below

by    Grant Beard…A near neutral phase of  ENSO

This is an on-going observation of southern cold fronts over the Australian mainland for 2014..
SCROLL DOWN TO THE COMMENTS FOR POSTS
If the comments don’t load . Click on the Title of this post and that will load the latest updates and comments…
cheers

ALL FURTHER POSTS AND UPDATES ON THIS TOPIC WILL APPEAR IN THE COMMENTS SECTION AT THE BASE OF THIS PAGE
PLEASE CLICK THE TITLE IF THE COMMENTS HAVE NOT LOADED.

Victoria and Tasmania has had its first cold spell 19th Feb 2014 as we approach autumn in 2 weeks
it is not unusual to see the first glimpses of autumn in the last weeks of Feb. and a mixture of warm and cold in March

Mt Buller had 26mm of rain but temps fell to 0.1 deg c during the night after the rain
Max temp around 4.8 deg c today

No snow evident on the mt buller webcams
http://www.mtbuller.com.au/Summer/Mountain2/Webcams

THe low pressure cell doesn’t look as though it was attached to the westerly belt. THe cold loks as though it came from the southern ocean . The Antarctic has record sea ice extent, so plenty of cold near the polar region.
Wondering if this year that cold will wander across the Australian mainland? 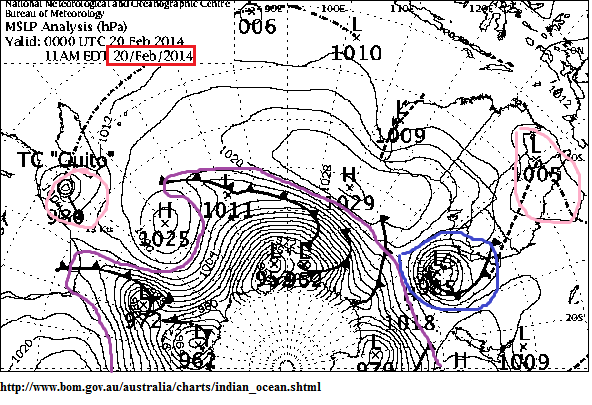