Scroll down to the comments below to view all Long paddock seasonal forecasts from 2019 and onwards. Indian monsoon, the most prominent of the world’s monsoon systems, which primarily affects India and its surrounding water bodies. It blows from the northeast during cooler months and reverses direction to blow from the southwest during the warmest months of the year. This process brings large amounts of rainfall to the region during June and July.

All further information is in the comments section below.

‘…it was the second-warmest financial year on record’

.My comment… Since when are ‘financial years’ the  time frame for the primary seasonal report?

Scroll down to the comments section for all further entries

XMETMAN notes from this time series graph of UK rainfall

” A very marked reduction in the precipitation totals in the second week of February across many areas across the UK. ”
What causes it?
READ ON

XMETMAN CHALLENGES THE MET OFFICE CLAIMS OF A RECORD
Independent assesor Warwick Hughes has found the same disparity with theBOM. Its food for thought. But thanks for all the hard work from our independent auditors

I thought l would start collecting rainfall (or lack of it), time series data from around the world. 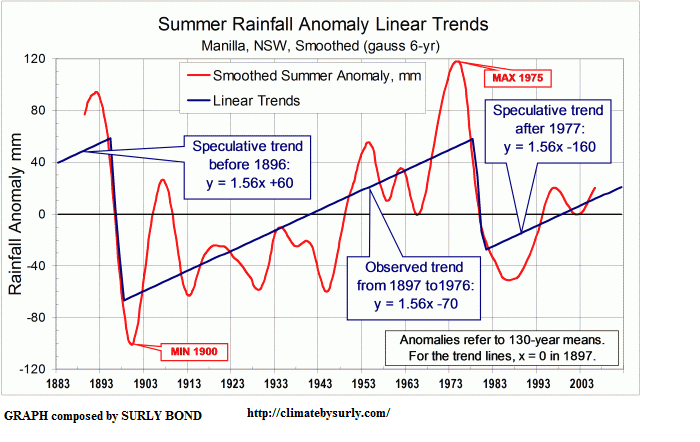 This example was produced by ‘SURLY BOND’
http://climatebysurly.com/2014/10/22/decadal-and-inter-decadal-changes-in-rainfall-iii/

–NOTICE THE SAW TOOTH WAVE FORM AND THE STEP SEQUENCE

-In this graph the inflection point cliff drop were in 1896 and then again at the climate shift at 1976.

Note ‘surly’s’ comments
“The oscillation between higher and lower values in nature is often modelled as a smooth harmonic curve.
That does not fit well here.
Not only does the rise from 1897 to 1976 fail to curve down approaching the final peak, the falls from 1892 to 1900 and from 1975 to 1987 are extremely sharp. They are collapses.”

I WILL SLOWLY ADD TO THE COLLECTION IN THE COMMENTS BELOW