An incredible correlation between vertical geopotential height and the phase of the AAO.

Amazing l have never noted that before. A light bulb moment.

Thanks to technology we have access to a feast of resources.

Zoom into new NASA satellite and aerial images of the Earth, updated every day.

In no specific order.

Theory. Height of the troposphere

‘The height of the tropopause depends on the location, notably the latitude, as shown in the figure on the right (which shows annual mean conditions). It also depends on the season (1, 2). Thus, it is about 16 km high over Australia at year-end, and between 12 – 16 km at midyear, being lower at the higher latitudes. At latitudes above 60� , the tropopause is less than 9 -10 km above sea level; the lowest is less than 8 km high, above Antarctica and above Siberia and northern Canada in winter. The highest average tropopause is over the oceanic warm pool of the western equatorial Pacific, about 17.5 km high, and over Southeast Asia, during the summer monsoon, the tropopause occasionally peaks above 18 km. In other words, cold conditions lead to a lower tropopause, obviously because of less convection.

Deep convection (thunderstorms) in the Intertropical Convergence Zone, or over mid-latitude continents in summer, continuously push the tropopause upwards and as such deepen the troposphere. This is because thunderstorms mix the tropospheric air at a moist adiabatic lapse rate. In the upper troposphere, this lapse rate is essentially the same as the dry adiabatic rate of 10K/km. So a deepening by 1 km reduces the tropopause temperature by 10K. Therefore, in areas where (or at times when) the tropopause is exceptionally high, the tropopause temperature is also very low, sometimes below -80� C. Such low temperatures are not found anywhere else in the Earth’s atmosphere, at any level, except in the winter stratosphere over Antarctica.

On the other hand, colder regions have a lower tropopause, obviously because convective overturning is limited there, due to the negative radiation balance at the surface. In fact, convection is very rare in polar regions; most of the tropospheric mixing at middle and high latitudes is forced by frontal systems in which uplift is forced rather than spontaneous (convective). This explains the paradox that tropopause temperatures are lowest where the surface temperatures are highest.

The tropopause height does not gradually drop from low to high latitudes. Rather, it drops rapidly in the area of the subtropical and polar front jets (STJ and PFJ respectively in the Figure on the left), as shown in the Palmen-Newton model of the general circulation (Fig 12.16 or Fig on left). Especially when the jet is strong and the associated front at low levels intense, then the tropopause height drops suddenly across the jet stream. Sometimes the tropopause actually folds down to 500 hPa (5.5 km) and even lower, just behind a well-defined cold front. The subsided stratospheric air within such a tropopause fold (or in the less pronounced tropopause dip) is much warmer than the tropospheric air it replaces, at the same level, and this warm advection aloft (around 300 hPa) largely explains the movement of the frontal low (at the surface) into the cold airmass, a process called occlusion (Section 13.3) (4).

They appear to be fully formed a few weeks later in the last week of June. The week of this post.

The AAO was positive during the month of June 2019 but is forecast by half the ensemble models to go strongly negative in the coming weeks.

I am not sure of the link between the Stratosphere warming and the AAO but will be on the look out.

This post is in progress. Check the comments section below for further entries. Click on the title of this post to load further information if necessary

In progress.    Current and historical.

A meandering sub tropical jet 200hpa m spawns a surface low within a surface trough off the coast. The AAO/SAM has dropped 1.5 point in the past week and the jets develop tighter bends. The low forms within the peak of the sub tropical jet trough. Here is the forecast

Atmospheric rivers are relatively long, narrow regions in the atmosphere – like rivers in the sky – that transport most of the water vapor outside of the tropics.

What are atmospheric rivers? | National Oceanic and Atmospheric …

From Ex cyclone Trevor to the west coast of New Zealand.
Some exceptional rainfall falling as the stream pours its ‘goods’ on the NZ coast.

ACCESS  r showing the moisture stream /river flowing from ex Cyclone Trevor through the NSW/QLD border coast and on to west NZ
This is the path of a surface trough and the stream directed by an ana branch of the sub tropical jet on the Australian  mainland connecting to the exit arm of a sub tropical jet to NZ.
The 200hpa stream overlaying the surface troughing.
I think that is fair to say that is an atmospheric river.
Also a heat , moisture. conveyor belt from the tropics to the higher latitudes.
In this case the river is feeding into a trough in the westerly belt, 40-45 degs latitude
http://www.bom.gov.au/australia/charts/viewer/index.shtml?type=mslp-precip&tz=AEDT&area=Au&model=CG&chartSubmit=Refresh+View
_________________________
Forum discussion and info’ from New Zealand
http://forum.weatherzone.com.au/ubbthreads.php/topics/1496275/Re_New_Zealand_Weather#Post1496275
‘pete28’

An epic rain event occurring at the moment on the west coast of the south island, even by West Coast standards this is WET and the biggest event in 20 years for some locations. Cropp Waterfall (inland from Hokitika) which is one of the worlds wettest locations with an average of 11,000mm per year has had 613mm in the past 24 hours with nearly the same amount to come in the next day!”
next day’ pete28′ says
“Cropp River has just broken the NZ 48 hour rainfall record with approx 1,100mm falling in the past 2 days!”
————

a New Zealand river .. Waiho Bridge, near the town of Franz Josef..has been washed away in a severe rain storm, prompting the authorities to declare a state of emergency in the region.

The storm battered the west coast of New Zealand’s South Island, forcing the closure of 300 km of road due to flooding, according to local media reports.

I will just collect some information and record some observations

I will collect information and observations

Forecast for 532 thickness for Tasmania 6 days into Autumn. which can bring low level snow

Nothing like a wavy sub polar jet associated with a negative dip in the AAO/ SAM since —early February 2019, to produce dynamic wavy jetstreams at the 200hpa stratosphere.

is the cold pool in the Bight 5th March 2019. The day before it travails over Tasmania.

Temperatures got down to 9.8 deg in Hobart and light splatter of snow on Mount Wellington

Today’s taste of wintry weather comes less than a week after the state endured a day of record-breaking March heat.

Dover’s 40.1 degrees on Sunday was the first time on record any location in Tasmania has exceeded 40 degrees during March.

Impressively, Hobart’s 39.1 degrees on Sunday was also hotter than any day in the city during summer. Last season’s highest temperature was 37.9 degrees.

Sunday’s heat now seems like a distant memory, as much colder southwesterly winds flow over the state today.

Hobart was only sitting on 13 degrees at 10am, although wind chill was making it feel more like eight degrees.”

This post was created to publish any information about JETSTREAMS 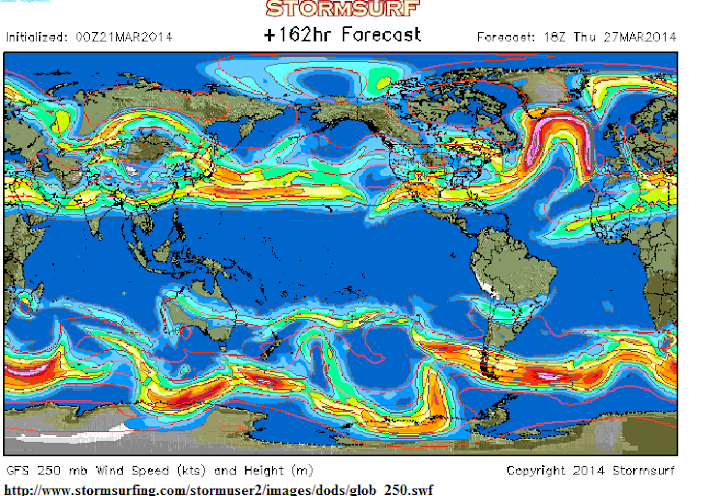 The link below is for the animation which is MUCH BETTER than the still snap above. Go to the link and enjoy the jetstreams in action

Thanks to GAIL COMBS for posting this link on this fabulous Jetstream animation
http://tallbloke.wordpress.com/2014/03/19/friends-of-science-billboard-seems-sensible/comment-page-1/#comment-73576