XMETMAN says ” There is such a black art into figuring out the relative strengths of an El Niño or La Niña event, that it’s with fear and trepidation that I say that the current 2015-16 El Niño cycle is the second strongest in the records which started in 1950″

‘SURLY BOND’ FROM MANILLA IN NSW AUSTRALIA HAS NOTED SOME INTERESTING TEMPERATURE CYCLES and their C0RREIati0n WITH ENS0
http://climatebysurly.com/2015/07/08/el-nino-and-my-climate/

“The reality of this temperature curve is supported by its close similarity to the recognised curve of the El Niño – Southern Oscillation (ENSO), as read from NINO3.4 Pacific Ocean sea surface temperature anomalies.”

More frequent hot days do not come in a three year cycle, but in a 1.5 year cycle related to ENSO.

More frequent hot days do not come in a three year cycle, but in a 1.5 year cycle related to ENSO.

The graph of number of hot days per year

The graph on the left is one I posted earlier. The height of each data point represents the number of hot days in a year, plotted near January. The pattern of points led me to join them by a smooth curve. This curve swings up and down rather regularly, with five peaks and five dips in the fifteen years. That is, more frequent hot days seem to come in a three-year cycle.
Is this cycle “real”? Should we look for a cause? Will the cycle continue?
Probably not! The points of measurement are one year apart. Cycles that are only three years long may be “aliases” of different and shorter undetectable cycles. (See Note below on Nyquist frequency.)

Of course they did.

Those who have followed the 2014/15 El Niño series from its start back in April will recall all the hoopla about the strong downwelling Kelvin wave that was traveling from west to east along the Cromwell Current (aka the Pacific Equatorial Undercurrent).  Based on the size of that Kelvin wave, alarmists were anticipating a super El Niño that would cause record-high global surface temperatures, but the super El Niño failed to form.

CLICK ON THE TITLE TO LOAD ALL FURTHER ENTRIES BELOW

There is currently plenty of media from the academics noting the climate modelling is suggesting an El Nino of sorts for 2014. Most evidence presented as been some warm anomalies in the south west pacific ocean
It is thought that Kelvin waves are pushing this sub surface warm anomaly toward the central and east pacific
Some are touting anomalies of plus 6 deg c
However this map below posted by Mike Hauber forum member of WZ forum is indicating anomalies of plus 2 deg c near the date line
You can follow this discussion here
http://forum.weatherzone.com.au/ubbthreads.php/topics/1251416/16 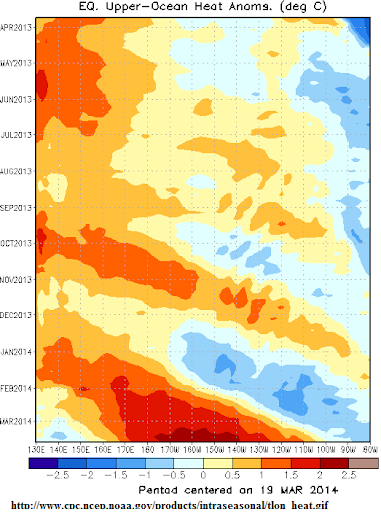 I was reading and article by Max Gongalez of weatherzone news
about the possibility of an El Nino in 2014
Article here
http://www.weatherzone.com.au/news/increasing-odds-for-el-nino-to-affect-australian-weather-late-2014/27106

accompanied by high atmospheric pressure over the western Pacific.

(cool phase) on the other hand, occurs when cooler than average SSTs prevail over the central and eastern equatorial Pacific.

This is accompanied by a low atmospheric pressure over the western Pacific,

The February 2014 MSLP anomalies show low pressure anomalies in both the east and west basin. Although there is a band of high pressure over Australia and the far west basin of the pacific

According to theory .. Low pressure in the east basin is a la Nina indicator

I’m not sure?
I thought low pressure was a symptom of warm SST anomalies..? 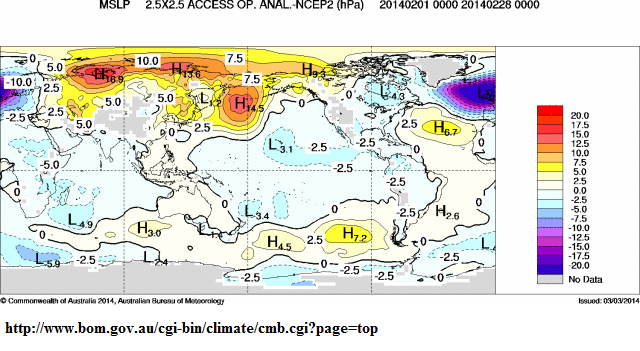 picture from Bob Tisdale from the link to his paper below

The first post is from an expert who pretty much studies ENSO full time from his blog
BOB TISDALE
http://bobtisdale.wordpress.com/2013/10/22/enso-basics-westerly-wind-bursts-initiate-an-el-nino/

CLICK ON TITLE TO LOAD ALL ENTRIES BELOW..
I COLLECT SNAPS OF THE GLOBAL SEA TEMPERATURE ANOMALIES OVER TIME 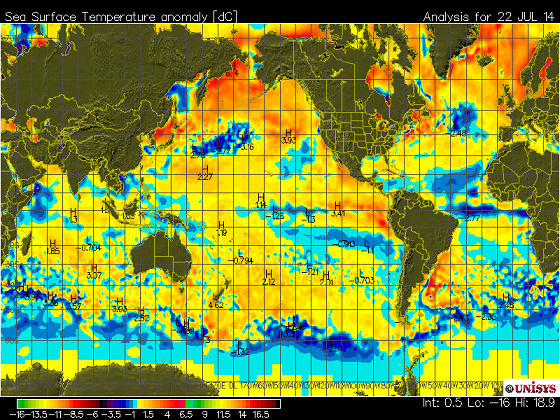 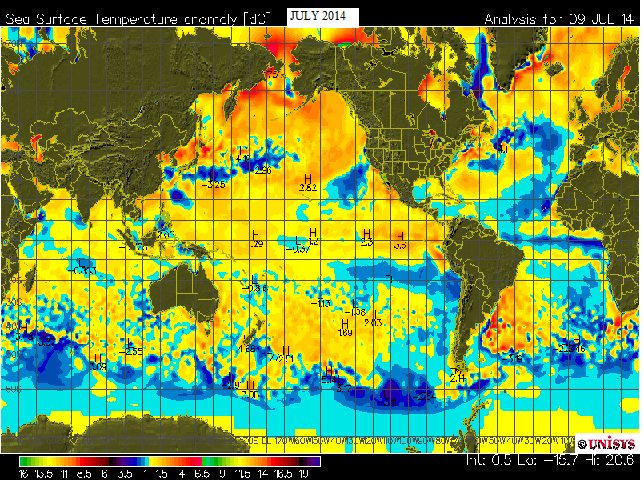 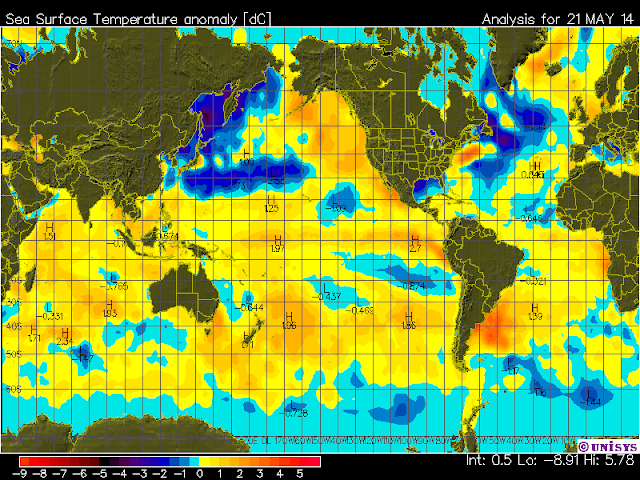 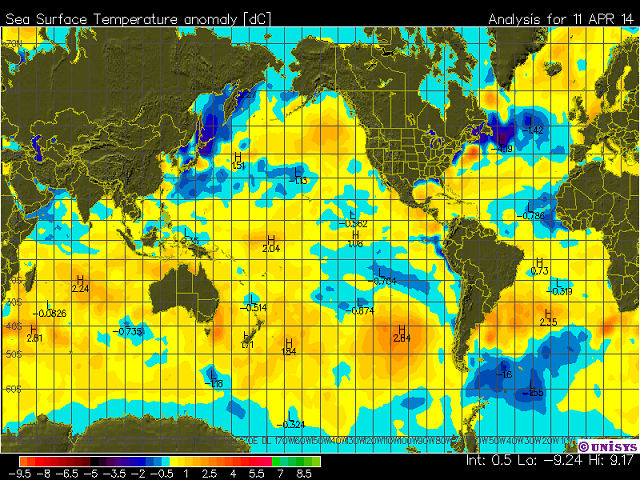 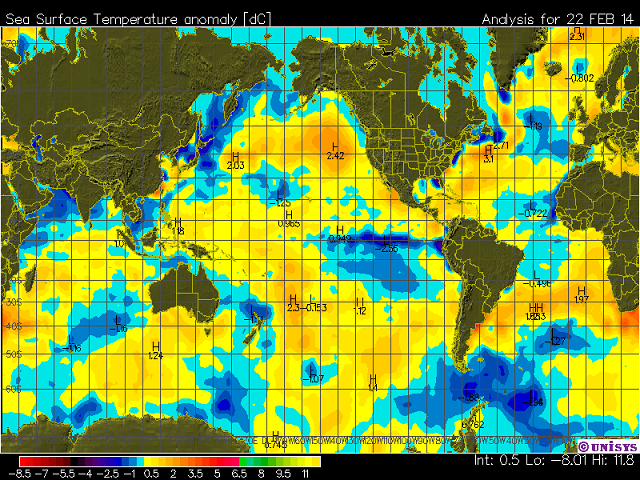 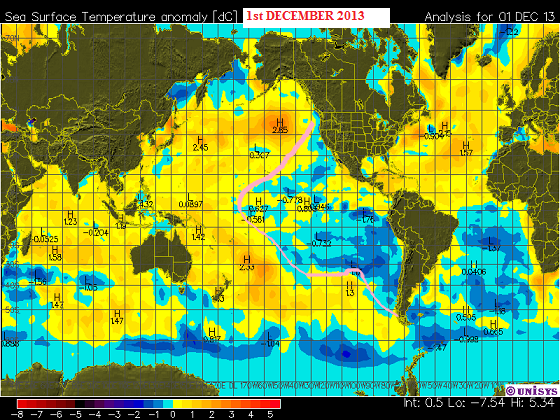 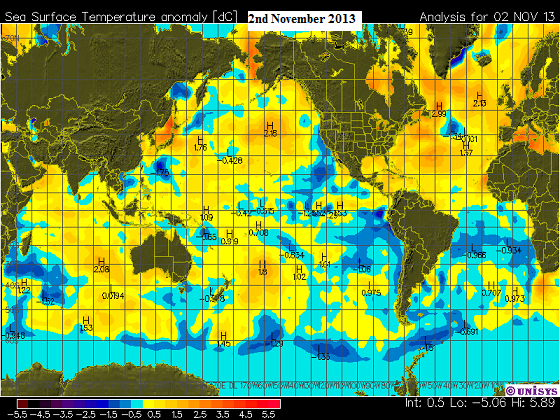 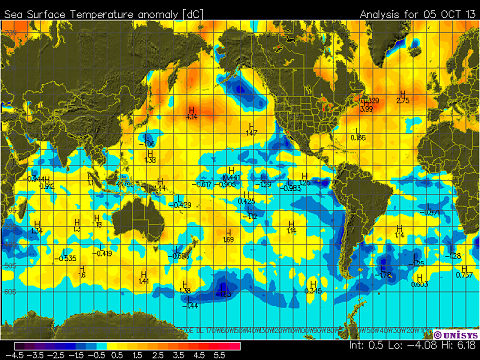 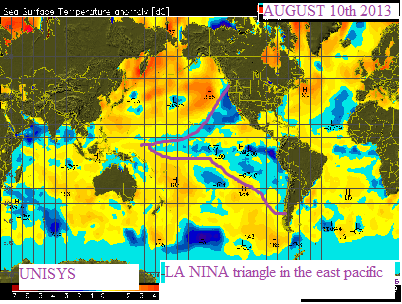 PLEASE CLICK ON THE TITLE TO LOAD ALL FURTHER ENTRIES BELOW

“The Southern Oscillation Index, or SOI, gives an indication of the development and intensity of El Niño or La Niña events in the Pacific Ocean. The SOI is calculated using the pressure differences between Tahiti and Darwin.

Sustained negative values of the SOI lower than −7 often indicate El Niño episodes. These negative values are usually accompanied by sustained warming of the central and eastern tropical Pacific Ocean, a decrease in the strength of the Pacific Trade Winds, and a reduction in winter and spring rainfall over much of eastern Australia and the Top End.

Sustainted positive values of the SOI greater than +7 are typical of a La Niña episode. They are associated with stronger Pacific trade winds and warmer sea temperatures to the north of Australia. Waters in the central and eastern tropical Pacific Ocean become cooler during this time. Together these give an increased probability that eastern and northern Australia will be wetter than normal.

There are a few different methods for calculating the SOI. The method used by the Australian Bureau of Meteorology is the Troup SOI which is the standardised anomaly of the Mean Sea Level Pressure difference between Tahiti and Darwin.”