I have started this blog post because today l have found out all major search engines are re routing the search string ‘climate shift’.

If you enter this term into any search engine, it will respond with pages and pages of ‘climate change’

We are being prevented from viewing alternative theories to man made climate change theories or facts, folks.

I will make an attempt to collect some links to climate regime shift sites that focus on natural variability.

…You can get around this by..

it was a pleasure to meet you at London. Some of you asked me about my paper in press about a link between astronomical, solar and climate oscillations. Here it is:

Scafetta, N., Milani, F., Antonio Bianchini, A., Ortolani, S.: On the astronomical origin of the Hallstatt oscillation found in radiocarbon and climate records throughout the Holocene. Earth-Science Reviews 162, 24–43, 2016. There is a free access to the article, and is valid for anybody until November 10, 2016 by using this link  http://authors.elsevier.com/a/1TlSB2weQTZcD

Scafetta’s new paper is all about validating the 60 year
cycle using highly technical methods.
I use an extremely simple method of sums with

STORAGE OF THE ABOVE GRAPHS ARE LOCATED  HERE
The above works belongs to TOM MANGO
https://weathercycles.wordpress.com/2015/01/08/following-tom-mango/

extract from abstract
“… using the canonical correlation analysis at least five coherent frequencies at the 95% significance level are found at the following periods: 6.6, 7.4, 14, 20
and 60 years. Thus, high resolution coherence analysis confirms that the climate system can be partially modulated by astronomical
forces of gravitational, electromagnetic and solar origin. A possible chain of the physical causes explaining this coherence is briefly
discussed.
2016 COSPAR. Published by Elsevier Ltd. All rights reserved”SCAFETTA 2016′

Image credit: NASA
Note from the author: I am sending you my new paper. It has been just published.

was my first connection and inspiration for cycle research and analysis

A master at his work!! Prolific researcher and defender of solar system dynamics and the earths climate
I should have stared this post ages ago!!

2014..
The complex planetary synchronization structure of the solar system 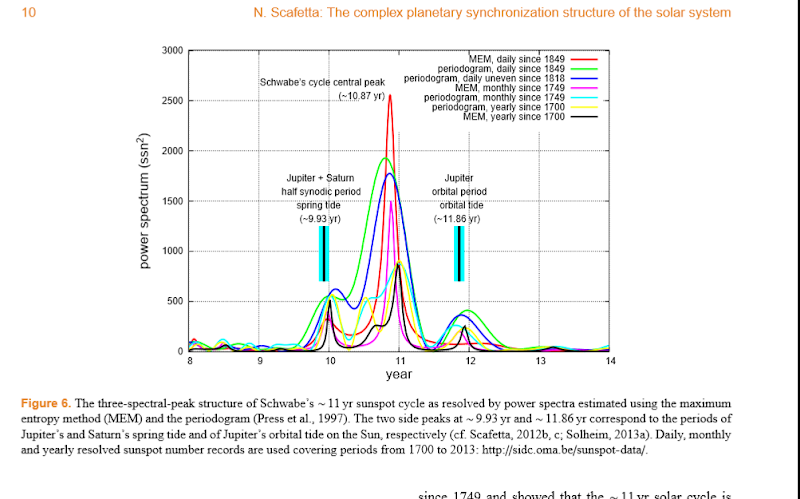 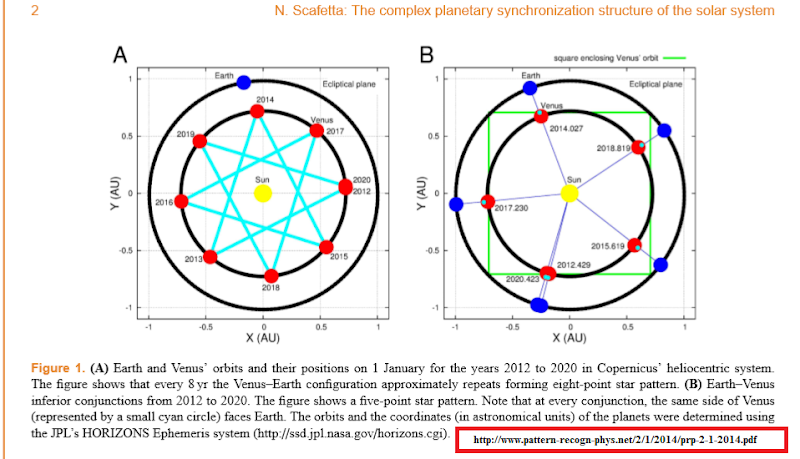 The complex planetary synchronization structure of the solar system

N. Scafetta 2014
http://www.pattern-recogn-phys.net/2/1/2014/prp-2-1-2014.html
—————————————————————-
From 1596 to 1619 Kepler formulated preliminary mathematical relations of approximate commensurabilities among the planets, which were later re- formulated in the Titius–Bode rule (1766–1772), which successfully predicted the orbital position of Ceres and Uranus.
..
(1) the planetary orbital periods can be approximately deduced from a simple system of resonant frequencies;

(2) the solar system oscillates with a speciﬁc set of gravitational frequencies, and many of them (e.g., within the range between 3yr and 100yr) can be approximately con- structed as harmonics of a base period of ∼178.38yr; and
(3) solar and climate records are also characterized by planetary harmonics from the monthly to the millennial timescales.
The general conclusion is that the solar system works as a resonator characterized by a speciﬁc harmonic planetary structure that also synchronizes the Sun’s activity and the Earth’s climate.
—————–
https://picasaweb.google.com/110600540172511797362/SOLARSYSTEMAndClimate#6042906737291319810

In fact, as Fig. 1b shows, in one synodic period Earth revolves 1.59867 times around the Sun, while Venus rotates on its own axis 2.40277 times in the opposite direction.
The sum of the fractional part of the two numbers is almost exactly 1 (∼1.00144). Thus, not only is Earth almost synchronized with Venus in a 8 : 13 or- bital resonance and in a 8 : 5 synodic resonance

The collective synchronization among all celestial bodies in our solar system indicates that they interact energetically with each other and have reached a quasi-synchronized dynamical state.

As discovered by Christian Huygens in the 17th century, entrainment or synchronization between coupled oscillators requires very little energy exchange if enough time is allowed.

Huygens patented the ﬁrst pendulum clock and ﬁrst noted that, if hung on the same wall, after a while, pendulum clocks synchronize to each other due to the weak physical coupling induced by small harmonic vibrations propagating in the wall (Pikovsky, 2001).

.. the Earth’s gravity or some other planetary mechanism has synchronized the rotation of Venus with Earth, the planets could have synchronized the internal dynamics of the Sun, and therefore they could be modulating solar activity.

Thus, the Earth’s climate could be modulated by a complex harmonic forcing consisting of
(1) lunar tidal oscilla- tions acting mostly in the ocean;
(2) planetary-induced so- lar luminosity and electromagnetic oscillations modulating mostly the cloud cover, and therefore the Earth’s albedo; and
(3) a gravitational synchronization with the Moon and other planets of the solar system modulating, for example, the Earth’s orbital trajectory and its length of day (cf. Mörner, 2013).

These relations relate the four inner and the four outer planets of the solar system.
Even if the Geddes and King-Hele rule is not perfect, it does suggest the existence of a speciﬁc ordered structure in the planetary system where the asteroid belt region acts as a kind of mirroring boundary condition between the inner and outer regions of the solar system.

5 The matrix of planetary resonances
—————————————-
Molchanov (1968, 1969a) showed that the periods of the planets could be approximately predicted with a set of sim- ple linear equations based on integer coeﬃcients describing the mutual planetary resonances.
The gravitational harmonics of the solar system
———————————————————–
Several spectral peaks can be recognized, such as
-the ∼1.092yr period of the Earth–Jupiter conjunctions;
-the ∼9.93 and ∼19.86yr periods of the Jupiter–Saturn spring (half synodic) and synodic cycles,
respectively;
-the ∼11.86, ∼29.5, ∼84 and ∼165yr orbital period of Jupiter, Saturn, Uranus and Neptune,
respectively;
– the ∼61yr cycle of the tidal beat between Jupiter and Saturn;
and
– the periods corresponding to the synodic cycle between Jupiter and Neptune (∼12.8yr), Jupiter and Uranus (∼13.8yr), Saturn and Nep- tune (∼35.8yr), Saturn and Uranus (∼45.3), and Uranus and Neptune (∼171.4yr),
as well as many other cycles including the spring (half-synodic) periods.

The ﬁrst model relating the 11yr solar cycle to the con- ﬁguration of Venus, Earth and Jupiter was proposed by Bendandi (1931); later Bollinger (1952), Hung (2007) and others developed equivalent models.

It was observed that Venus, Earth and Jupiter are the three major tidal planets (e.g., Scafetta, 2012c).

By taking into account the combined alignment of Venus, Earth and Jupiter, it is easy to demonstrate that the gravitational conﬁguration of the three planets repeats every 22.14 yr

Moreover, because the conﬁgurations Ea–Ve–Sun–Ju and Sun–Ve–Ea–Ju are equivalent about the tidal potential, the tidal cycle presents a recurrence of half of the above value (i.e., a period of 11.07yr). This is the average solar cycle length observed since 1750 (e.g., Scafetta, 2012b).

(Brown, 1900; Scafetta, 2012c). Scafetta (2012b, c) used de tailed spectral analysis of the sunspot monthly record since 1749 and showed that the ∼11yr solar cycle is constrained by the presence of two spectral peaks close to the two theoretical tidal periods deduced from the orbits of Jupiter and Saturn (see Fig. 6). These two frequencies modulate the main central cycle at ∼10.87yr period.

The proposed semi-empirical and empirical harmonic so- lar models agree about the fact that the Sun is entering into a period of grand minimum. Indeed, the latest sunspot cy- cles #19–24 are closely correlated to the sunspot cycles #1– 5 immediately preceding the Dalton Minimum (1790–1830)

” (B) Detail the semi-empirical astronomical model proposed by Scafetta [37]. The red curve shows the original global surface temperature record published in Scafetta [37]. The blue curve shows the same global surface temperature updated to the most current available month. The back curve within the cyan area is the semi-empirical astronomical model forecast (since 2000) that clearly outperforms the IPCC 2007 CMIP3 general circulation model projections (green area). The yellow curve is the harmonic component alone without the anthropogenic component. (For interpretation of the references to colour in this figure legend, the reader is referred to the web version of this article.)”